Every year OUT Magazine, along with Here Media, host the OUT 100 Awards. This award ceremony is dedicated to the top people around the world who have helped the LGBTQ community thrive and advanced the fight for rights over the past year. Getting prepared for the event takes months of hard work and tireless effort from staff in both the NYC office and the LA office.  The announcement of who will be the lucky selection to grace the cover of the magazine always brings excitement and in some cases disappointment. We all have our own ideas of who deserves the sacred spot, and of course I’m going to be saddened by it when its a pop singer who isn’t actually gay but likes to profit from the gay community, instead of a hard working people who are on the ground fighting hard to make real changes. But I digress.

The event is always in a large to huge venue, with at least one thousand people in attendance, and usually a few hundred overflow standing in line out front. The sponsors can range from luxury cars, to top shelf liquors and even some mega corporations such as Target. A team of event staff are brought it, which can lead to some issues when staff members of the magazine are stopped when trying to walk in to the back of the venue to check on something, luckily, we just flash our badges and the event staff walk away.

So much is always going on during the event, plenty of music by live performers and talented DJs, video clips showing the making of the OUT 100 issue, free alcohol pouring like a river and more photo ops than one know what to do with. The first year Target set up a candy room, where guest could walk in, take a photo with the target dog, and then grab a plastic bag and fill it up with as much candy as you’d like. I was in a diabetic’s dream/nightmare. If only I would have worn cargo pants I could have loaded up for the year, of course that would mean I would have to own cargo pants…which I don’t.

Speaking of attire, getting dressed up for this event is one of the most exciting part. I searched for about 2 weeks to find the ideal bow tie one year. It was a beautiful multi-color checked bow tie, that went beautifully with my Dolce & Gabbana slim fit suit. Everyone in attendance is dressed up to the nines, even the staff will stress out and struggle deciding what best way to get dolled up for this once a year celebration. It can be quite amusing seeing some people you work with who wear nothing but shorts and tank tops throughout the year, actually put in effort for one night. As far as me, I always like to put in effort in to what I wear, I don’t do it to please other people but to please myself. I feel that so many people across the country no longer put the effort in to themselves anymore. I think jeans can be great for a casual Friday, but aside from that, they should not be work at the office. Where are the slacks, the collar shirts, the indication that you didn’t roll out of bed and walk in to the office? I must be too old fashioned, but that’s who I am. Any who, back to OUT 100.

One year, my first year, I was so shy and timid to approach any celebrity. My boss Kirk, who is always forward and outgoing, encouraged me to “just get out there!” Easy words for him to say, he was wearing an all pink suit, that he rocked out, and he was always oozing confidence. So I gathered up all of my courage and walked over to Eric Stonestreet. Most of the world had become familiar with him from Modern Family as flamboyant Cam. He is actually heterosexual in real life, but plays the part so comically well one could totally forget that. I first saw him act in the movie “Girls will be Girls,” a hilarious movie about drag queen wanna-be celebrities (Thank you David for introducing this movie to me!). I just had to say hello. I asked Javi, one of the fashion interns if he would come with me, as back up. We walked over, I introduced myself, and even though the music was incredibly loud, we could hear one another pretty well. He suggested that we take a photo, which I threw my phone in to Javi’s hands and posed next beside him. I thought it was so cool. Such a sweet guy.

Over the course of that night and the following few years I got to meet some remarkable people at the OUT 100 Awards. Tim Gunn, Harvey Fierstein, Alan Cumming, RuPaul and most of the drag queens from RPDR, Alexander Wang, Beth Ditto…well the list really goes on and on. Thanks to Kirk for showing me that you have to take what you want, and do what you feel, I was less shy than I have ever been. The years after I left Out magazine, made it even easier as I was able to drink at the parties and actually enjoy myself. One year, Michael Urie was sweet enough to bend down so that he could take a picture with Billy and myself who are well under his height.

The after parties each year are either incredible, or horrible. One year some of the RuPaul’s Drag Race queens went to a bar in Hell’s Kitchen, and we partied all night. Shangela, being a Texan gal, and I continued to reminisce about the Lone Star state and the good, the bad and the ugly moments we both experienced there. However, one year we all went to a small bar, that couldn’t hold 20 people comfortably. On top of that it was beside a barbecue restaurant and the smell did not mix well with the copious amounts of liquor that was already in our stomachs.  So a large group of us just went down to Pieces in the West Village.

The OUT 100 Awards night is a combination of Celebrities, Music, Visuals, and most importantly Gay issues. If you ever have the opportunity to attend this special event, I highly recommend that you do. 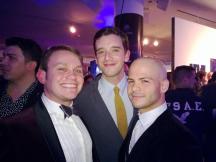 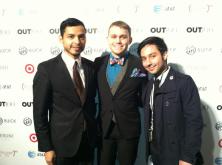 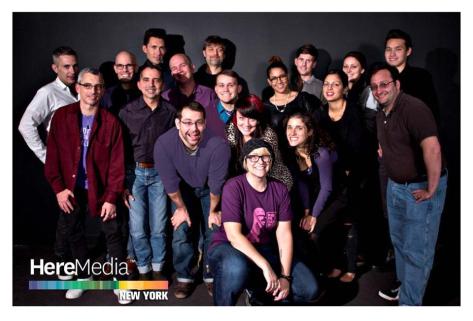