A Diabetic Attack can be terrifying. Not just for the diabetic suffering through it, but for those who are around the victim too. I want to dedicate this post to my Family, Friends and Colleagues who have all experienced a Diabetic Attack with me. The help you all provided during those horrific times helped save my life. Also please let me state that I am not a doctor, and everything that follows is my own, first hand account.

A Diabetic Attack, there are two types: 1. A Low Blood Sugar and 2. A High Blood Sugar. This post is going to focus on the low blood sugar. A High Blood sugar attack is very serious as well (you can read my blog on DKA here), however a diabetic can normally function still.

A Low Blood Sugar Attack. As a Type 1 Diabetic my body does not produce insulin. The reason is unknown, and I am the very first in my family tree to ever get it. It’s not hereditary, and I ate healthy as a child. For whatever reason, my white blood cells attacked and destroyed the insulin produced by my pancreas. So, to keep on living, I have to take insulin daily to live. I take insulin before each meal that is fast acting, so that it can keep my blood sugar steady while I eat. I also take insulin before I go to bed, this is a slower acting insulin that last 24 hours to help regulate my sugar levels all day. Since I was diagnosed with Type 1 Diabetes all those years ago, I have unfortunately experienced some very dramatic low blood sugar attacks. Now, you might be wondering “how is that possible when my body doesn’t produce insulin to lower my sugar?” Hold your horses, I’m getting to it.

Yes, all of the insulin in my body is administered by me directly. There are many factors that contribute to low blood sugar attacks. Here are a few: Waiting too long from administering the insulin to actually eating, Insulin taking longer to get in to my system, Change of or less food and carbs in the meal, Exercise, Excessive heat, Stress, Anxiety….etc etc. The list can go on and on and yes, environment can play a large role in this too.

One major attach I had when I was a sophomore in High school and I was invited by one of my friends, a junior, to the Prom. I was so nervous and excited that I had a low blood sugar attack right after the photos, and I didn’t come back too until we were at the restaurant when my friends noticed I ordered a rare steak, blood rare. They got me a soda and I can back too just in time to be groped by my date in the back seat of a suburban. Did I mention she was female and not at all my type…because she was female. I digress.

Another time when I was in high school, I had a date with a guy I thought was very cute (I had bad taste and few options then). I went over to his house and we were going to watch Lord of the Rings, The fellowship of the ring. This was the first time I was hanging out with him alone and I was so nervous. I never saw LOTR before this so I thought it would be fun. Well, my blood sugar dropped during Cate Blanchett’s opening monologue. (She’s so talented! I want her to read me bedtime stories). I was terrified that orcs were coming after me, my head was spinning a mile a minute, I had no idea where the orcs came from and why hasn’t we had them all exterminated, I got off of the bed and walked to the living room and balled up in a fetal position on a reclining chair.  The guy I was with, Jason, is a dumbass so he had no idea what was going on. Luckily for me, when my body has a low blood sugar attack, and there is no help from anyone else, it can force me to get the help I need. I came too while drinking juice staring in to the refrigerator. I then put the juice away, told Jason I needed to go and went home.

In a low attack, the feeling really can’t be described. It’s a dream state. Sometimes you see and recognize the people around you, sometimes you don’t. When I was younger suffering through an attack, my dad would try to get me to drink juice or soda, but I would tell and fight and I didn’t even know it was my dad. Sometimes you can replay some of you happiest or saddest moments thinking that you’re living them again. You don’t actually realize you’re in a dream state. You are mentally stuck in a dimension that no one can get to and it’s scary being there alone. I’ve been Alice through the looking-glass,  I’ve been a pirate, an elf, a murder victim. Most of the time it’s a horrible nightmare. But, when I come too…that’s even worse. I don’t know what I said or did. Did I hit someone, did I take off my clothes, did I profess my undying love or hatred towards someone. An apology is always the first thing that happens when I come too. In the movie Steel Magnolias, Julia Roberts really did her homework. When she apologizes after her attack at the salon, it was on point.

One time, I went home with a cute guy I met at a bar. He told me that he was 15th in line to the Spanish throne, I didn’t care he had a rippling six-pack that went on for days. Anyway, we get back to his place and as we are making out I have an attack. I have a dream that I’m a prisoner during the Spanish Inquisition and lock myself in this guy’s bathroom. As we had just met that night he called the cops. I don’t really blame him. The police noticed something was wrong and searched my wallet to find a card that states I’m a diabetic. They get me juice and I’m back to normal a few minutes later. It freaked the prince out, but he still asked me out 2 weeks later. So as you can see, sometimes my surroundings can influence my state during the attack.

Another time I was walking home from work in Boston and my legs started to give out. That is another weird sign of low blood sugar, my legs actually fail me and I will fall down. This happened down a beautiful tree-lined street while I was walking the 3 small blocks from The MALE Center to my apartment. As I leaned against a wall I couldn’t find the strength to get up and make it the last 1/2 block. Luckily, a kind young lady was walking behind me and saw me fall. She came running up and asked what she could do, I told her that I needed sugar, a soda, chocolate, something. She ran to the corner store and got me a Pepsi. I was very lucky she was there, It could have been a while until my legs regained the strength. Catherine was her name, a sweet student at BU studying architecture.

Although during an attack I can get wild, run around, strip, sing, act like a drunken fool, I can also be quite, motionless, almost asleep. The many different ways I have an attack scares me. Sometimes, when I feel one coming on, I will start wandering around. The original intent is to find sugar, but I lose the intent as I’m walking and then I’m just aimlessly moving around.

These attacks can happen at any hour of the day or night. As I said, my Family have experienced them at all hours, Coworkers have at the office, Friends have when we’re out and about. I am really sorry for anyone who has gone through this with me. I wish that a better control could be had with Type 1 Diabetes, but as I said, it’s a lot more factors than just taking or not taking the insulin. There are some incredible medical breakthroughs happening and hopefully more to follow. Take a look at JDRF if you want to donate, they are an amazing organization. If you are a diabetic and tired of using needles all day, I can highly recommend AFREZZA, inhalable insulin. If you need help finding a doctor, or ways to pay for it, they can help with it all. Just recently United Healthcare was forced to approve AFREZZA, because it was illegal for them not too.

“Drink your juice, Shelby!” I have heard that line more times than I can count. Although it gets old, the more people who know how to react to a low blood sugar attack, the better. Speaking of juice, the orange juice machines that they have in the markets in Paris have the best tasting orange juice I have ever had. I think it’s a mixture of oranges and clementines, a delicious mixture.

So, if you have been one of those amazing people near and dear to me who have gone through a diabetic attack with me, Thank You. I am sorry that you had to witness it, but grateful you were there to help. Ideally I could say it will never happen again, but nothing is exact. If you have a diabetic in your life, make sure to recognize the warning signs of low and high blood sugar. 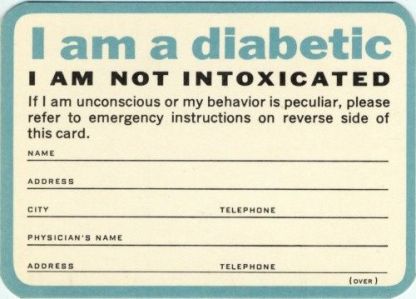