Two Hundred Twenty-Three years ago, Marie Antoinette lost her head. She has always had a strong influence on my life. It has been a quest of mine to learn more truths about this legend of a Queen, with all anecdotes and erroneous attributions set aside.

To many, “Let them eat cake” is the first thing that pops in their minds when they think of Marie Antoinette. In all reality, there is no evidence that proves she ever spoke or thought that phrase. She is remembered for being a spoiled, spendthrift figure in history that caused the French revolution by not caring about her subjects. We all know that if it makes a good story, we can be forgiven for overlooking actual facts.

I believe that we can learn a lot about this ill-fated Queen from the affair of the diamond necklace. If you are unfamiliar with this event, I am going to try to sum it up briefly for you here.

1772, Louis XV of France requested that the Parisian jewelers Boehmer and Bassenge create a diamond necklace (worth over 14 million USD in 2015) for his favorite mistress Madame du Barry. A necklace made of so many precious diamonds would take several years to be completed. When Louis died of smallpox in 1774, Madame du Barry was banished from court by the new king, Louis XVI and his wife Marie Antoinette. The jewelers now were stuck with this extravagant necklace. They offered to sell it to the king to give to Marie Antoinette as a gift, but when he offered it to her, she stated that the money would be better spent funding the army. It is also believed that she would not want to wear something that was originally meant for another woman of whom she extremely disliked. The jewelers tried, in vain, to sell the necklace to other royal families outside of France, to no avail.

Now here’s the tricky part. A woman who resembled Marie Antoinette, almost perfectly, was used as a pawn to trick a cardinal who was out of favor with the queen, to get him to go to the jewelers and say that the Queen did want the necklace, but would have to pay in installments. The jewelers agreed and the necklace was delivered to the cardinal, who gave it to the mastermind of the entire deception. The cardinal, either desperate to believe the queen was going to welcome him back to court, or, as some believe was in love with Marie Antoinette, was also in trouble.

The mastermind behind this affair was Jeanne de Valois-Saint-Remy, the descendant of the Valois royal family, through an illegitimate son of King Henry II. Jeanne had been quite poor and believed herself to be better than most, because of the royal blood in her veins. She wanted this necklace so that she would be able to afford a lifestyle she thought she deserved. Once she had the necklace, she gave it to her husband to take to London, break apart the necklace and sell the diamonds individually.

When the jewelers were not paid, they went directly to Marie Antoinette to ask for the money. Marie Antoinette said that she had never ordered nor received the necklace. The news that the queen had purchased a necklace of such extravagance while the common people were dying of hunger on the streets caused a riot. A trial was to happen to get to the bottom of what had happened. The letters that instructed the cardinal to purchase the necklace for the queen were signed Marie Antoinette de France, the cardinal either did not know, or had forgot that queens of france only sign their given name. This was enough evidence to prove that Marie Antoinette made no such request. The woman who resembled the queen had come forward and further stunned all who saw the resemblance she had to the Queen. Although Marie Antoinette had nothing to do with purchasing the necklace, this affair had ruined her reputation, and gossip would continue to grow about her, with little or no evidence.  The anger that the people had felt continued to swell in their hearts and when the French Revolution came, she went to trial on 14 October 1793 and was executed on 16 October 1793.

I tend to believe that Marie Antoinette was actually innocent of most crimes charged against her. Considering her refusal of the diamond necklace and wishing to put the money towards the people, show that she knew money could be better spent. She was forced at a young age to leave her family to live in France, where most did not like her or want her there. She was a mother who loved her children. I do not see Marie Antoinette as a horrible person. Although things were bad in France at the time, we have seen in many years since how bad things can really get. Although I understand the French Revolution, and its major significance in world history, I find it a brutal way for a Queen to meet her end. 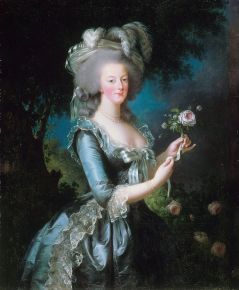 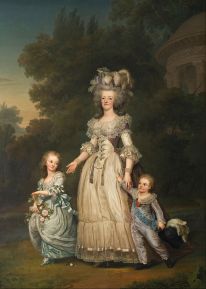 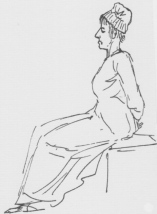 One thought on “Marie Antoinette”