With the World Cup quickly approaching, it reminds me of the first time I was lucky enough to see the French national team. It was scheduled for Friday 10 November 2017, France was playing a Friendly against Wales (Pays de Galles) at the Stade de France.

Although I had seen France play hundreds of games, they were always on television. This was going to be my first live, in person match and I was ecstatic. In Paris, KFC was doing a promotional giveaway of either a soccer ball or a beanie and gloves with the FFF logo. I chose the hat and gloves because it can get chilly in Paris and I can always buy a soccer ball. I bought the ticket for the game the day they became available. I was worried though because the site wasn’t working and I had to stay glued to my computer waiting for it to be fixed. I secured the ticket, but the problem was that I needed to print it out. Having just moved to Paris, I did not have a printer yet and had no idea where to print it out. Luckily my friend told me to send it to a CopyTop print shop. I did it and it only cost me 1€. Thank goodness. The guy working the counter was surprised by how excited I was to be going to the game.

Game day had finally arrived. I had lunch in the Marais, a quick drink with a friend and then headed back to my place to change. I donned my Griezmann jersey, FFF hat & gloves and headed towards the Metro station. Lucky for me I live on the line 13, so I won’t have to transfer at all. Unfortunately, I thought I was clever enough leaving an hour before the gates open, but with how crowded the trains were, it felt like all of France had the same idea.

I didn’t really step out at the Stade de France stop, it was more like crowd surfing. I was unsure of where I was going so I just kept up with the crowd and as we exited the station and walked across the giant bridge the beauty and magnificence of the Stadium appeared before me. I was so excited, this giant cement structure adorned with French flags and football flags made my heart beat a little faster. I got to my seat and couldn’t have been happier. I was just a few rows (20 or so) from the field and pretty close to center. In every seat was a French Flag, so the ticket already paid for itself. I took a few shots of the empty stadium before the crowds piled in.

I ordered a beer and hotdog through the app and it was delivered incredibly quick. Plus my beer came in a collectible cup. Players from both teams took to the field for warm ups, and it felt like a crush I finally got to meet. Before I knew it every seat was full, and the game was ready to begin.

I loved watching the game at the stadium. Being with the crowd as they cheered at the goals and booed at the flops, it was incredible. I got to see Giroud, Pogba, Matuidi, and although he didn’t play, Raphael Varane. The most exciting part was how every time I tried to take a picture of Antoine Griezmann he would bend over so I could get a great shot of his can. He couldn’t tell me he loves me in front of all those people, so we have our own system in place. I got to witness Griezmann score in the 18th minute and Giroud score in the 71st minute….what else could I ask for?

As the game came to an end it stood at FRA 2 – PDG 0, I had an incredible time, at a sporting event no less. The stadium stood and clapped off the teams after the game and then the crowds started the mass exodus. I however wanted to remain a bit longer to savor the moment as long as I could. I stayed in my seat, surveying the field one last time before I had to fight the crowds on the metro.

Now when I watch a game either at home or at a bar, I am sad that I’m not seeing it at the stadium. I do fondly remember the first time I got to see them play though. I would have liked to gone to the World Cup this year, but Russia is not a good place to be. Hopefully one day it will be, but that is not anytime soon. I digress, anyway, go France, bring home the world cup, you’re an amazing team. Fiers Detre Bleus!!! 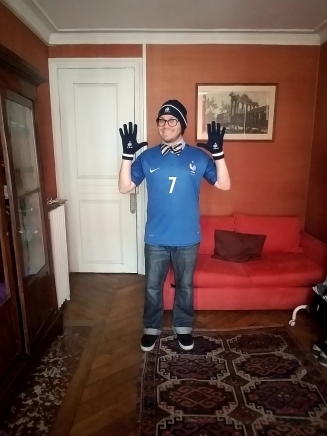 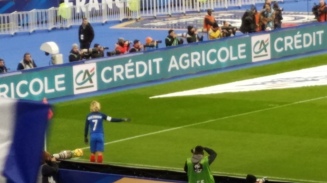 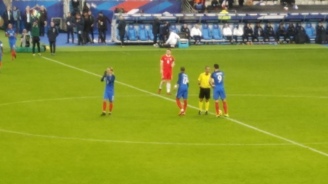