I’d like to tell you a story if I may. This story is incredibly, absolutely true. When I first heard of it, I was certain it was some bad joke, but I did my research and discovered the truth of the matter. I was working in Boston in 2008, at the MALE Center for a fabulous boss, Michael. He told me on a cold winter day about the Boston Molasses Flood. “Say what?” I exclaimed. He then went on to tell me how on a very frigid winter day a molasses tan burst open and flooded the streets of Boston, covering the streets with the sticky substance. I was very amused and definitely suspicious. Being a trusting southern boy, I assumed that he was just yanking my chain. So I instantly got on google to investigate.

Boston, January 15, 1919 (100 years ago), the weather had warmed up to near 40 degrees ferenheight, much warmer that the previous freezing days. In the North End stood a 50 foot tall, 90 foot in diameter tank holding up to 2,300,000 gallons of molasses. That delicious gooey substance that makes fabulous cookies, amongst other treats. Sometime around 12:30PM, reports of a blast that sounded like the end of the world was happening. That giant tank of molasses had burst open, either from the shifting weather or the physical state of the old tank, or perhaps a mixture of the two. A wave up to 25 feet of molasses went rushing down the streets at 35 miles per hour. Although it might not sound too fast, it was 1919, so fastest movement ever at the time. 😉

The force of the Molasses wave damaged an elevated railway and even knocked buildings off their foundations. After the initial shock of the wave, nearby streets were covered in molasses 2 to 3 feet deep. Those who survived the flood were walking waist deep in it. Unfortunately, 21 people were killed by the incident and another 150 were seriously injured. Some people were struck by debris, others got caught in the goo and drowned.

I can’t even imagine a horrible death like drowning/suffocating in molasses. I hope that those who died did not suffer much.

Boston is a city full of history, almost too much history for the united states. This is just another interesting piece to add to the puzzle. 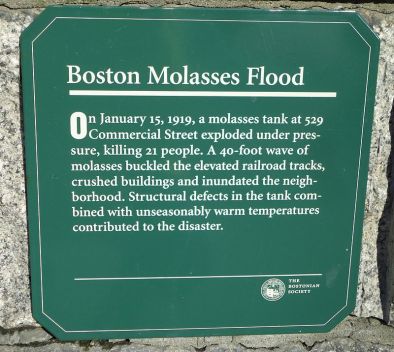 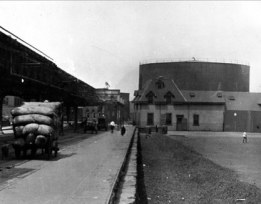 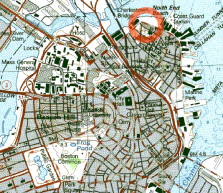 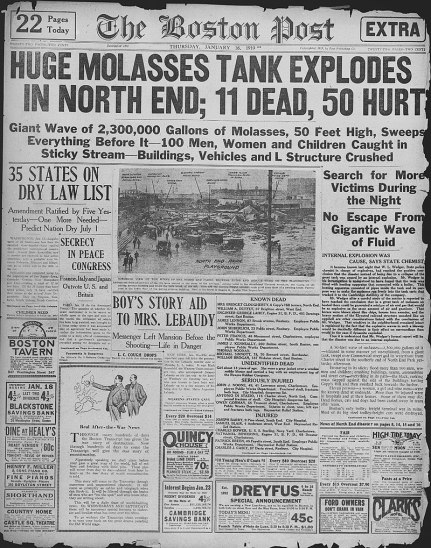