Thank you for reading my letter today. This letter is not just a piece of fan mail, but instead, a much-needed plea for your help. I am a type 1 diabetic who has been living with this disease for almost 30 years now. As a type 1 diabetic, I am reliant on insulin to live. I have to administer insulin to myself 4 times a day, if I stopped taking insulin, I could be in a coma within 24 hours and dead within 48. So it is extremely necessary for me to continuously check my blood glucose levels and inject insulin as needed.

A major problem for all Type 1 Diabetics is that the drug manufacturers who produce the insulin keep raising the price of the medication. It does not cost any more money to make, it is the exact same insulin, but they are now charging over 10 times the amount for the very same product. In 1996 a vial of Humalog insulin(that’s a fast acting insulin that must be administered before each meal) cost $20. Now, the cost is about $275 for the exact same insulin. Nothing has changed, not the portion, not the product. Eli Lilly is the maker of this drug, and they just recently announced that they will be selling a generic version of Humalog insulin for half the price. So I can only pay $137.35 for a vial of the generic version of what other people will pay $275. It’s still the same product though. Made the exact same way, in the same facility, but they are charging less.

Eli Lilly is by no means the only one or worst of those playing a game of Screw the Sick. United Healthcare has gone above and beyond to restrict their patients access to proper healthcare. United Healthcare accepts bribes from certain drug manufacturers to deny access to certain Type 1 Diabetes supplies and medications. Why should a health insurance company get to decide over a doctor what is best for a patient?

How in the world is it legal for private businesses to make a huge profit on people with diseases? How is it that I must pay more money each month to buy my medication to live than for my rent? Why is the entire healthcare system in the United States so far broken?

Type 1 Diabetes can not be prevented. Factors such as diet and exercise do not cure or treat Type 1 Diabetes. This disease requires insulin for the person to live. Why is it that because I am a random Victim of Type 1 Diabetes, that I have to pay money for pharmaceutical executives to get wealthy?

Madame, the United States needs your help more than ever. I know asking for your help, after you have already done so much for the people is a bit of a cheek. You were screwed over by the Democrats first by Obama and then by Bernie. You deserved better and we the people deserved better. As the only competent politician in the United states, your intelligence and action are greatly needed.

Healthcare in the United States should not be a profitable industry as it currently is. It should be run as a mandatory non-profit. That should be all aspects from doctors, to pharmacies and especially the drug manufacturers. I have pretty good health insurance, but I still pay thousands of dollars each year for health expenses. Why has the entire government of the United States turned it’s back on the sick people of the United states?

I’m begging you, Madame President, take arms against this reality shit-show that pretends to be a democracy and fight for us all. I stand with you, strong and proud. I will always stand with you. Healthcare in the United States needs a leader to fix it entirely. I am eagerly awaiting your instructions. 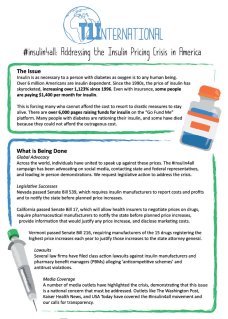