Hello Again. Today my journey is taking me to the small town of Ruffec, France. Here I will be looking at an 18 bedroom Hotel that has an interesting tie to World War II history.

Operation Frankton: Cockleshell Heroes Raid, The British Prime Minister Winston Churchill believed the mission shortened World War II by six months and Admiral Louis Mountbatten, the commander of Combined Operations, deemed the raid “the most courageous and imaginative of all the raids ever carried out by the men of Combined Operations”. The two heroes of the story, Hasler and Sparks, stayed at this very hotel and contacted the French Resistance for help. So in reality, its not a huge part of history, but it is cool to know that two real life heroes stayed here.

As for the Hotel. It is not currently open, and that scares me because who know how sad the state of it might be. I am expecting to walk in and see the castle from Beauty & the Beast, after all the talking furniture has cleaned it up. Fingers crossed.

Here is some information about the town. A quiet town, Ruffec has maintained a small historical centre around Armes Square and the church (the focus of your visit).  Armes Square is dominated by its grand Town Hall which was built in the 1830s. Although not an obvious tourist town it clearly gets plenty of English-speaking visitors as the majority of the shops have “English spoken” signs. It has a useful selection of shops and restaurants if you are holidaying in this area.

The highlight in Ruffec is the Church of Saint-André, a little lower down the hill from the main square. Built in the roman style the church dates from the 12th century and once belonged to the abbey at nearby Nanteuil-en-Vallee, although substantial alterations and additions were made in the 15th century following a fire that destroyed all but the facade.

The beautiful carved decorative facade, featuring some inset statuary is the most interesting part of the church. The inset statues are the 12 apostles and you will notice that most have been decapitated. This occured to many religious statues and carvings in France during the revolution. (Take that religious figures!)

Notice the beautiful stained glass windows which are a contemporary addition by Vivian Oël, a student of Salvador Dali.

Carry on down hill and you get to a lavoir on the river. The lavoir (communal wash area) was built in the mid 19th century.

Also in Ruffec you can see the ruins of a the small Chapel Saint-Blaise and the remains of a castle. The castle building that remains is private and is just a part of the original chateau that dates back to the 10th century. The river in front of the castle was canalised by the Comte de Broglie in the mid 19th century to improve the waterway which up until then was very marshy. Building the lavoir was a part of this improvement.

At the train station again, too early as usual. I go to get my seat reservation and have an hour to kill before my departure. The train station is busy as can be, all of the commuters headed in to Paris keeps the entire place a buzz with movement and rush.

I stop in the bookstore and start perusing the novels. Dan Brown has come out with another book, using the same character from the Da Vinci code. How many art history related crimes are committed on such a global scale, and why is Robert Langdon the only one who can solve them? Anyway, I quickly move past to the literature section and something catches my eyes. One of my favorite novels ever, La Reine Margot by Alexandre Dumas, is sitting on the shelf in front of me. I have read the book many times in English, but now I get to read it in French. And for only 2 euros, I’m going to count it as a major win!

The train is headed much further south than last time and is travelling at a great speed. My ears must have popped more than a dozen times. This time I have a small cabin to myself, so I spread out to relax and doze off when my ears would allow it. We arrive at Gare D’Angouleme. A quick transfer here to a smaller train headed to Ruffec. I have 30 minutes, so I take a quick stroll through the town. One of the first places I pass makes me stop dead in my track. It’s an office for La Front Nationale. The insane, far right group that has a questionable past and hopefully no future. Marine le Pen, the French version of Trump and Anita Bryant combined, is their leader, their hero. It’s a travesty. I snap a quick picture that I hope to print and burn one day as a ritual sacrifice to the universe. The front door opens and, I am shocked and saddened that it is a woman. Now, I know that women are allowed to have faults, however supporting a person or party that does not respect women at all baffles me. You would think with the Republican women in my family I wouldn’t be so flabbergasted. Wrong,  she looks at me, eyeing me up and down and says “Bonjour” in a nasty tone. I, disgusted and angered simply respond “salut,” and continue walking. I finish a quick spin around the square and head back to the train station. A place where I feel calm and safe.

My train comes and takes me to Ruffec. I finally arrive and I step out of the train, thanking the conductor and walk towards the station. I’ve memorized the map directly to the hotel, it’s only a 5 minute walk. As I’m walking down the street I realize how similar a lot of the buildings in this town look. Similar stones, similar roofs, similar windows. I get to an intersection where the hotel is. There is a lot of traffic going each direction, so it takes me a few minutes to cross the street. I snap a few photos of as much of it as I can see. Then I cross the street back to the hotel. This time there isn’t a car to be seen. I peer inside the window of the front door directly in to the bar and the photos are pretty much exact to the likeness of it. I walk to the left side of the building, 3 different doors to enter the place. I did notice a window in the attack that was broken, so there could be some serious damage inside and maybe even wild animals. I double back and head to the right side of the place. There is another entrance, but this door has a broken glass pane too large enough for anyone to put their arm through, unlock and open the door. I’m starting to get worried. I don’t want a place that has been a squatter’ s home. I make my way towards the center of town looking at all the shops and houses. I did notice a private fenced in parking space for the hotel specifically.

I get to the agent’s office and there I meet Andrew, a British expat now living and loving France. He grabs the keys and we walk back towards the hotel. I’m trying to remain neutral as we approach, even though the voices in my head are shouting at him to find out why the broken windows have not been replaced. He unlocks the door and there is trouble getting it open. It is quite obvious that he has not shown this place before, and if he has it was a long time ago. We walk in and there is a ton of trash covering the floor. Liquor bottles, ripped up newspapers, condom boxes, cigarette butts. It looks like some high school kids broke in and had a party. Andrew advises me to look past all of that to see the potential. I told him, only if the owner cleans up the mess before I sign anything. I ask him why the owner wants to sell and he informs me that he doesn’t really know, but will find out for me when we get back to the office.

We walk into the dinning rooms and they are beautiful…ish. There was once a lot of love that went in to making the rooms so elegant, however, now it has fallen in to disrepair. The wood floors, all original, are unable to have 2 line up properly beside each other. The floor has a wave feeling to it, and I almost got seasick going from one room to the other. We go up one set of stairs and view 9 bedrooms with ensuites, and real ensuites bathtub, sink and toilet, very impressive. Unfortunatly the roof.on this side of the building was tile and is badly damaged. There is standing water in the attack and water damage to the ceilings and floors on the rooms below. The entire roof will need to be replaced. We head to the other staircase to check out a further 9 rooms. The floor on this side feels straight, but it could be the 40 year old carpet that is leading me to believe this. The rooms all basically identical to the other 9, minus the water damage. Each of the 18 bedrooms was huge. That was a major surprise. You can easily fit a queen bed and sofa in each room. The kitchen has been completely gutted. Throughout the bedrooms were plenty of alcohol bottles, jeans, underwear and trash showing that squatters had invaded.

The asking price for this hotel is 98,100EUR. Although it has a lot of potential, that potential comes at a great cost. If I were to put an offer in, it would be 20,000. Not a penny more. When we get back to his office, we find out the owner lives a few villages over and has had the place shut down for 4 years now. He put it on the market over a year ago just to be done with it. From the looks of the place, neither he, nor anyone else had been to care for the property ever since.

I must admit that I am sad at how poor this place has been looked after the last few years. I feel most of the work that needs to be done, could have easily been prevented if the owner cared at all about it. Oh well. Back to the station I go, hopefully I can take a nap on the train and be refreshed for my meeting tomorrow morning. 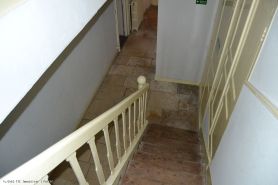 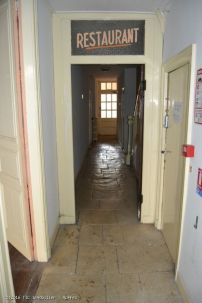 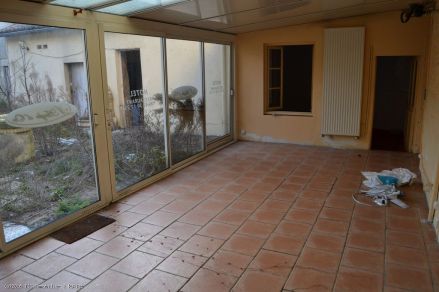 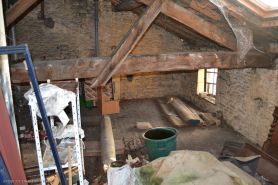 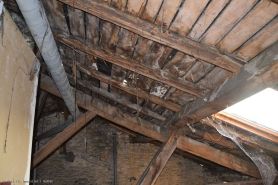 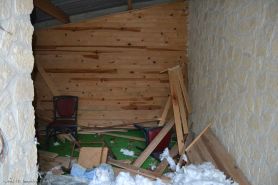 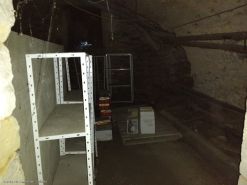 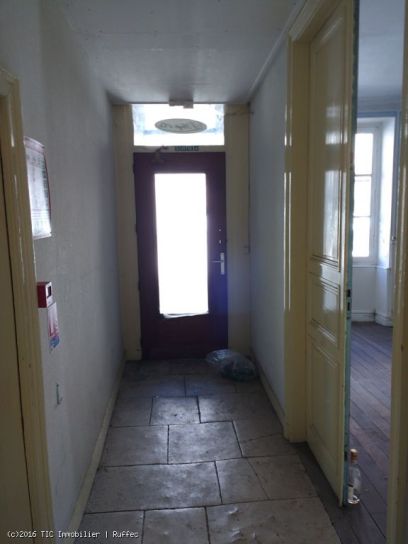 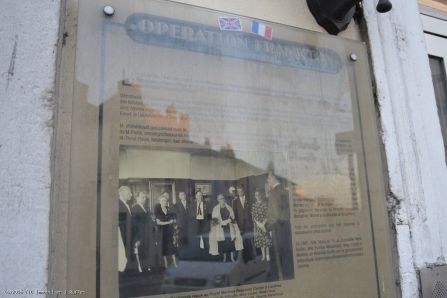 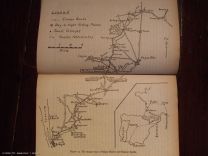 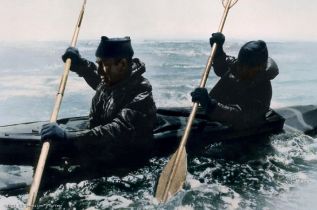 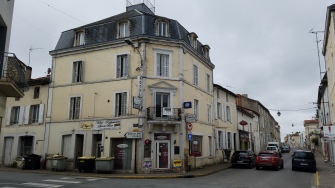